Easter School 2019: “How can it be?”
Wesleyan reflection on the mystery of the cross

The annual Easter School at Wesley House provides an opportunity for preachers and worship leaders to come together in Cambridge, to join with well-known teachers and academics. We spend time listening, reflecting and exploring theological concepts in order to be clearer about what we believe and how we preach those beliefs Sunday by Sunday.

This year’s event had the intriguing title, “‘How can it be’: Methodists contemplating the mystery of the cross.” The contemplation was enabled by a rich feast of teaching brought together with a brave and generous sharing of insights and ideas. This dynamic mixture kept bringing us back to the question of what we believe about sin, sacrifice and atonement in relation to the cross of Christ – and how we preach those beliefs. 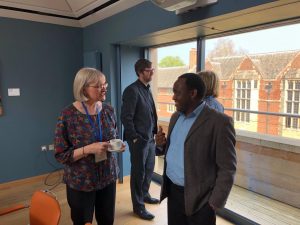 The keynote speaker was Dr Graham McFarlane, Director of Research at the London School of Theology. He gave us two challenging and engaging sessions on how Christian faith speaks of sacrifice and atonement in relation to the cross of Christ. Dr McFarlane quickly engaged the group by pointing out that in Roman’s 1:17-19 Paul is talking about his ‘product’ in the sense of what it is he is ‘selling’ to first century Christians in his preaching and writing. He them made the rather shocking statement that as preachers we do not know what we are ‘selling’. This set the tone for the rigorous engagement with scripture and doctrine which occupied most of the next day.

He took us from the stories of creation to the resurrection and stimulated our thinking about the meaning of the cross, the nature of sin and sacrifice and the doctrine of atonement. We worked with the definition of sin as, “the relational dysfunction that manifests itself in unauthentic action towards God, neighbour, self and creation.” This contrasts with authentic action where we exercise God-given dominion (Genesis 1:26-31).

We looked at the three different kinds of sins described in the Hebrew Scriptures: ‘Khet’, an inadvertent sin; ‘avon’, a deliberate sin and ‘pesha’, a deliberate sin of the heart, a sin which is about who you are rather than what you do. It is pesha that can only be redeemed by the death of the sinner – the sins for which Jesus died. Graham was direct and often controversial in his teaching but he was also generous, open to challenge, counter argument and illuminating insights from the group. At every point we were given the space to question and share reflections with the speaker until teacher and learners were engaged in a rich conversation where everyone’s contribution was listened to and valued.

Every preacher around the table was challenged to think deeply about the nature of the problem  the cross seeks to overcome and about why the cross is the solution to that problem. The small groups deepened still further the reflection on this and continued the work of grounding what we were hearing in the context of the worship we lead and the sermons we preach. We also noticed in the groups how far we had drifted as preachers and pastors from the rigour of John Wesley. A quick look at his instructions for the conduct of classes, bands and the work of individual pastors led us to ask ourselves, How far are we watering down the doctrine of sin and atonement to make our preaching more palatable for modern congregations? This was a question we came back to when we were looking Charles Wesley’s hymns on the cross.

The stimulating thought and reflection continued through the viewing of the film, “The Road” a chilling and effective vision of the end of the world, which is also a heart-rending study of parenting. This led us into the second seminar and group work where the focus shifted from sin to atonement.

These themes were picked up again by Dr Julie Lunn through her study of the hymnody of Charles Wesley seen through the lens of mysticism. We looked together at a very small selection of Wesley’s hymns on the cross, noting his use of mystical language and imagery from the Hebrew Scriptures and reflecting on how this use of language might influence how we preach about the cross. It was fascinating to discover just how many verses of hymns are omitted in our modern hymn books and to reflect on the impact of these omissions on the intended meaning of the hymns. We were drawn back again into reflection on how far we are watering down the Christian gospel in order to make it palatable to modern congregations.

This brief study of the mystical language of hymns brought us back to thinking about how we use music in the liturgy. We had had an excellent workshop, led by two professional musicians who lead worship in a Methodist church. Sarah Rogers is a well-known and well regarded composer and Geraldine Allen has had a career as a solo clarinetist. In the workshop they combined their shared passion for music with their vision for using music creatively to enrich worship rather than for just filling an empty space in the liturgy. They got us listening intentionally to music rather than regarding it as background and prompted us to think about how we could use the language of music more imaginatively and intentionally in our worship. Musicians and even those claiming to suffer from tone deafness could not help but be inspired by Sarah and Geraldine’s approach to music in worship.

The time in the classroom was set in a pattern of worship which gave us space for prayer which included listening to God and kept us anchored in the unfolding story of the Passion. The events in the world around us also impacted both our learning and our worship as news came in of the terrible fire at Notre Dame. The sermon in the closing Eucharist, preached by Dr Andrew Stobart, Director of Research at Wesley House, illustrated perfectly how we ground our belief about the cross in our preaching in a world that is full of suffering, death and destruction.

As people left they were talking about how this Easter School had been a rich learning environment where deep conversations could happen without fear of judgement or ridicule. The group of teachers, facilitators and participants created a space where it was safe to share, to try out and to explore ideas. It was a rich feast but there was also plenty to take home and share with our congregations because this was a learning experience which connected concepts and ideas with the impact those concepts and ideas have on the lives of believers.