Kevin and Jad’s most excellent adventure to Israel and Palestine, March-April 2019. 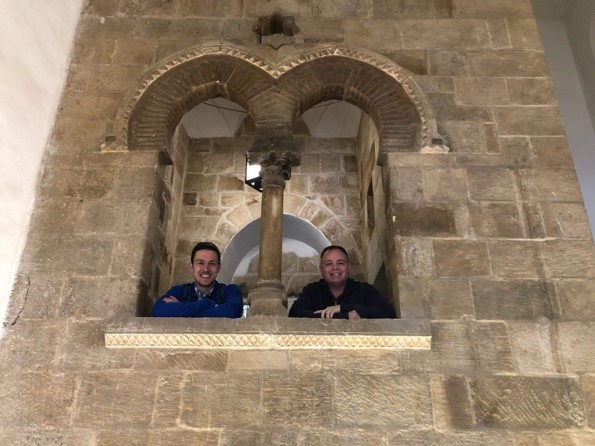 Kevin: After reading Blood Brothers by Elias Chacour, I realized I was missing a narrative.  There was a group of people caught up in this intractable conflict, who had no animosity towards the Israeli Jews, yet they were suffering as if they were Israel’s foes.  They seemed to be caught in between. I knew I had to take advantage of an opportunity, arranged by Wesley House, to go to Israel/Palestine in order to hear more deeply this narrative that most Americans don’t get to hear. I was doubly blessed by getting to meet Elias Chacour and hear him talk.

Jad: Over the past few years, I have become more interested in the theme of “borders”. I have spent time at the United States-Mexico border, including a papal mass celebrated by Pope Francis in memory of migrants who have died in the journey to the US. I have visited the Stewart Detention Center, one of the largest immigrant detention centers in the US. Stewart represents an “inland border” for migrants detained at the US-Mexico border who are quickly whisked far away to the rural town of Stewart, Georgia. I have crossed the border from “outside” to “inside” as a chaplain intern and volunteer at Metro Regional Youth Detention Center. Even sitting around the same table as children imprisoned at Metro, I felt the invisible border between us. With these border experiences in hand, I was drawn to Israel/Palestine, a borderland on so many levels. There is the border, in some places a literal wall, between the two countries. There is also the border between heaven and earth transgressed by the incarnate Christ who became God in sandals and walked among the people of modern Israel/Palestine. I wanted to witness this strange paradox of incarnation and separation and set off to Israel/Palestine in order to hear more from the people of the Land.

Part of the immersion, supervised by the Methodist Liaison office in Jerusalem, is to volunteer with a group, helping out in different ways.

Jad: I spent my first two weeks at the Hope School in Beit Jala, a town in the West Bank of Palestine close to Bethlehem. Founded by the Mennonite Central Committee in 1962, Hope School is now run by Palestinians in order to provide “top quality education to underprivileged children in the West Bank and Jerusalem.” I was placed with the three, four, and five-year-olds. They were eager to become teachers themselves as they taught me numbers, colors, and animals in Arabic. Though we spoke little of each other’s language, sharing crayons and pushing each other on the swings brought us together. The nearly limitless joy of the children was tempered by the teachers’ perspectives. The teachers told me that these children have limited opportunities in the West Bank due to the restriction of movement by the Israeli government. In response to this, many of the children grow up and leave Palestine if they are permitted to do so. Summarizing the experience of young people, one of the teachers told me, “There is so much potential and yet so little hope.” The Hope School seeks to change this reality through high-quality education.

Kevin: I was lucky to be placed with the  Wi’am, the Palestinian conflict transformation center,I n the shadow of the wall in Bethlehem, under the remarkable leadership of Zoughbi E. A.  Zoughbi, a good friend of mine. The Wi’am center transforms lives by offering conflict resolution expertise for groups and families in Palestine, and specific programs for women, youth, and children. While there I participated in discussions with a Greek Orthodox priest and Palestinian women on forgiveness, with a Muslim sheik on human rights, with many passing British and American guests on the situation in Palestine and God’s love in the midst of a violent world.  I helped edit (with Jad) their annual report and I made numerous write-ups on Facebook for their activities, while serving coffee and food, and taking pictures. While there Zoughbi’s wife (an American) was denied entry into Israel, and everyone was shocked. I offered the best pastoral care I could to the traumatized staff and family.

We were fortunate to meet many of partners with the Methodists working in Israel and Palestine, participated in and preached at a Pilipino United Methodist church in Tel Aviv and the St Andrews Church of Scotland in Jerusalem, and explored many of the significant sites. We had many long conversations with a Franciscan monk at the Church of the Holy Sepulcher during our multiple visits there, increasing our understanding of the history surrounding it. We attended Holy Week services at St Andrews Church of Scotland, St George’s Anglican Cathedral, the Garden Tomb, the Lutheran church of the Redeemer,  and Maundy Thursday at the Ecco Homo Convent.

A group from Queens Theological College arrived, and we helped out as well as participated in their pilgrimage to the Holy Land. Besides visiting the holy sites in Nazareth, Galilee, Jerusalem, and Bethlehem, we visited a synagogue and had a Shabbat meal with a Jewish family, and we also heard the stories of the lives of local Palestinians (Christian and Muslim) in Bethlehem, the Aida Refugee Camp, and Hebron.  We tried to gather as many different perspectives as we could on the existing situation.

Kevin: Hebron is a perfect example of the intractable conflict.  The city, like Jerusalem, is important to Muslims, Christians, and Jews because it has the tomb of Abraham.  It is divided up like the rest of the West Bank, and many Palestinians were forced out of the homes and businesses in order to create a buffer zone between them and the Jewish settlers. One street is like a ghost town, it contrasts with the busy market place just a couple blocks over.  The Israeli settlers use physical force and violence against the Palestinians, and the Israeli military (a larger presence than the settlers themselves) are there to protect the settlers. The tombs of Abraham, Isaac, and Jacob (and their wives) are split in two by a mosque and synagogue.  As Christians we could go into both. There are small elements of hope, like the Palestinian woman who started a business that is the only female owned and operated one in Hebron, and the Israeli supreme court siding with the Palestinians against the settlers who had moved into an uninhabited Palestinian building by force.

Jad: When arriving at the Tent of Nations, a rock with the message “We Refuse To Be Enemies” greets guests in a number of languages. Tent of Nations seeks to “build bridges between people, and between people and the land. We bring different cultures together to develop understanding and promote respect for each other and our shared environment.” Purchased in 1916 by Daher Nassar, the grandfather of the Nassar family who now runs the Tent of Nations, the family and the farm have faced increasing pressure from the Israeli government and surrounding settlements. They are in a court battle over the rights of their land with the Israeli government which began over 20 years ago. They have had hundreds of olive trees removed by those who do not want them to remain, even though they have full legal rights to remain thanks to a deed which was signed during the Ottoman Empire. The Tent of Nations hosts volunteers from all over the world and runs numerous programs, including a summer camp for children where they teach peacemaking and sustainability. For this work and more, the Nasser family received the 2018 World Methodist Peace Award. For all of us, they provide inspiration, encouragement, and challenge to work towards peace each day even when peace seems impossible.

Kevin:  From my military perspective, I appreciated the security measures required by Israel to keep their people safe, and I found myself at odds at times with those who saw these same security measures as a form of oppression to Palestinians.   If there were no Palestinians trying to kill Israelis, as in the Intifada of the early 21st century, then I might think the intense scrutiny was unnecessary.  The failed Intifada allowed the Israeli government to backtrack from implementing the “two state solution.” The situation is unique, in many ways, to other intractable conflicts in the world.  The state of Israel is based on its Jewish nature, and the people feel a need to maintain this key attribute in order to help protect future Jews from another holocaust experience. This has required the government of Israel to maintain preference for Jewish people in all forms of life.  Because the survival of the state has been in a precarious state since its founding, the military relies on preemptive activities and overwhelming force, often making the whole Palestinian community suffer for the actions of a few. The theory behind this is that the community and each family should police itself better to keep the militant few from violence towards Israel.  Holding the larger group accountable (as equally guilty as the actual perpetrator) has not been the norm in most western societies.

Many Palestinians are suffering because a militant minority has tried and is trying to eradicate Jewish people and the nation of Israel. Many have lost their homes, property, and even rights to basic necessities (water, electricity) because of these militant actions.  In my opinion, for security reasons, Israel sees the West Bank as a buffer area that they need to control, because of the Arab nations that have fought against it. I think eventually many in the Israeli government would like to make it completely a part of Israel someday, which is why they are letting settlers move into West Bank lands.

Many of these are Christians, and  I was fortunate enough to meet many. I hold these people dear to my heart, as I’m sure God does, because of their suffering.  As with their ethnic ancestor, Jesus, I cry out with them, “My God why have you forsaken me?” Many of these families have lived here since Jesus’ time, and these Palestinian Christians relate to Jesus as the suffering servant.  They do not believe Israel is an enemy, even as they suffer from the effects of the security apparatus. It is hard not to take issue with seeming draconian rules and means, like the large concrete wall, that cause individuals and  families to suffer. How does one sustain life at the crossroads of intractable conflict, with rich cultures, traditions, and narratives that are hard to reconcile?