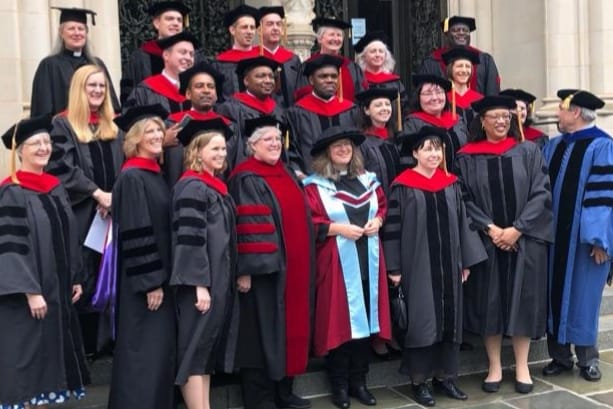 Spring 2019 marked a ‘first’ for the Doctor of Ministry programme which runs at Wesley House in partnership with Wesley Theological Seminary, Washington DC.

In 2015, the college began a new venture in hosting cohorts of international students studying for a Doctorate in Ministry, or DMin, validated through Wesley Seminary.  The DMin has been one of the main postgraduate qualifications for ministers in the United States for many years, and is a rigorous course designed to develop and deepen ministry and leadership and facilitate a mature and seasoned reflection on faith and practice.  And now it could be studied in Cambridge.

May 13th this year saw the very first graduations from that DMin programme.  Twenty-one of the students who started as part of the first two DMin cohorts in 2015-16 had completed the project thesis which is the research component of the degree in time for the annual Commencement ceremony for Wesley Seminary.  The areas of research for their theses ranged from interfaith marriages to multi-ethnic churches in Africa; from religious education to eschatological eucharistic theology in Wesleyan ecclesiological perspective.

These church leaders from vastly different contexts and church-settings had argued and sometimes wept with one another, had studied, prayed and eaten together, had learned and been changed in the encounter with one another in their learning, and had come to understand and respect and value one another in ways which will continue to shape them and their ministries for many years.  Over the course of the programme, some of these first of our DMin students had been elected bishops (in the United Methodist Church), had babies (twins in one case, a first child in another), moved appointment, got married…and all had fallen in love with Cambridge.

On May 13th, with their friends and families in attendance, and with students graduating with other Wesley Seminary degrees, they received their diplomas in the amazing surroundings of Washington’s National Cathedral.

For these first graduations, Wesley Theological Seminary invited our Principal Jane to deliver the Commencement address – which turned out to be her first ever sermon in a cathedral!  We were told the building holds 4,000 people, and it wasn’t far off being full.  Jane encouraged graduands to reflect on the ‘threshold’ moment of graduation; on who (their) theological education is for; and on the role of being for others both a gatekeeper and – more significantly – a gate, based on Jesus’ words in John 10.

It was then very moving as, one by one, the DMin students’ names were read out and they came forward to be awarded their degrees by the President of Wesley Seminary, the Revd Dr David McAllister-Wilson: the first graduands from what’s known in Washington as ‘the Cambridge DMin programme’.  These were some of the pioneers on a completely new degree course, who had been part of what many of them would describe as a transformative experience.  They will be followed by those who are finishing their theses from the first two cohorts, and then by students from the third and fourth DMin cohorts which are currently still in the taught phase.

We are deeply appreciative of our partnership with Wesley Seminary, and we value our DMin students whose presence with us enriches the global conversations we seek to stimulate and host here.